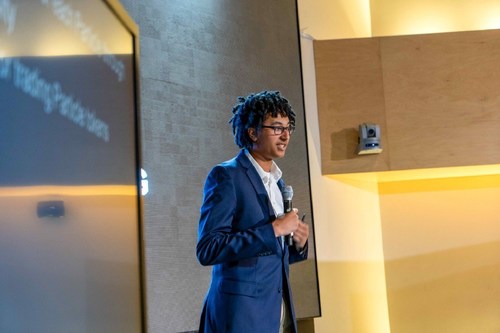 CINCINNATI and BERLIN, June 16, 2022 /PRNewswire/ -- Pre-seed round tech startup Anomaly Science announced its patent-pending business proposal for "Particles" - a method for the management and fiscal sponsorship of open-source projects, Web3 initiatives, decentralized projects, and tokenization of intellectual property rights through the creation and utilization of smart contracts and blockchain technologies.

"Anomaly Science is headquartered in Cincinnati, Ohio," explained 19-year-old CEO Jacob Haap, "But I knew we needed to be ready to do business in multiple countries. That's why I moved to the European Union."

Haap's vision is to lower the entry-level to computer programming, and potentially other types of business, for people who have ideas but no corporate structure for support.

"(Jacob Haap) is going to make it so that everybody, anybody, can create any kind of breakthrough software with a variety of different programmers who are all going to work independently, and together, at the same time," said American venture capitalist Tim Draper.  "And it's going to be really awesome because all of those programmers (won't) have to deal with the SEC and all that other stuff because they are all under one corporate roof, but they can operate as entrepreneurs.  They can have ownership in what they do. I think if you're a programmer, you should talk to Jacob."

More on Ohio Pen
Haap is a 2021 graduate of Draper's Hero Training program through Draper University, one of the top pre-accelerator programs in the world.

"I didn't know what to expect when I enrolled for Draper's Hero program," says Haap.  This year's cohort featured over 80 entrepreneurs from an original applicant pool of over 2,000.  The average age of the participants was 29.  "As someone who just graduated from high school, I originally felt different from people who had been actively working in the business for years.  But very quickly, I realized I was onto an idea with real potential."

During an event called Demo Day, over 80 entrepreneurs gathered in San Mateo, California to give pitches to an audience of investors.  A panel of judges ranked Haap's presentation third place, adding even more traction to his startup.  Since then, Haap took his initial investment, continued to develop his business plan, and built proof-of-concept interfaces for linking crypto wallets with his hybrid source-code repository.  "We are ready to take the next step with an investor who sees the amazing potential in the model we have built around Particles," explained Haap.

"Particles open a new door," continued Haap, "enabling greater collaboration and sharing of work, creating knowledge pools and hybrid-source codebases, and a means to do business in our growingly decentralized world that can function across international borders nearly seamlessly."

More on Ohio Pen
Anomaly Science is currently trying to start seed round funding with a goal of 500k.  This is an opportunity for investors to become part of a transformational approach to doing business.

To learn more about Anomaly Science, you can reach us via email: [email protected] or visit our
website anomsci.com to join the waitlist.