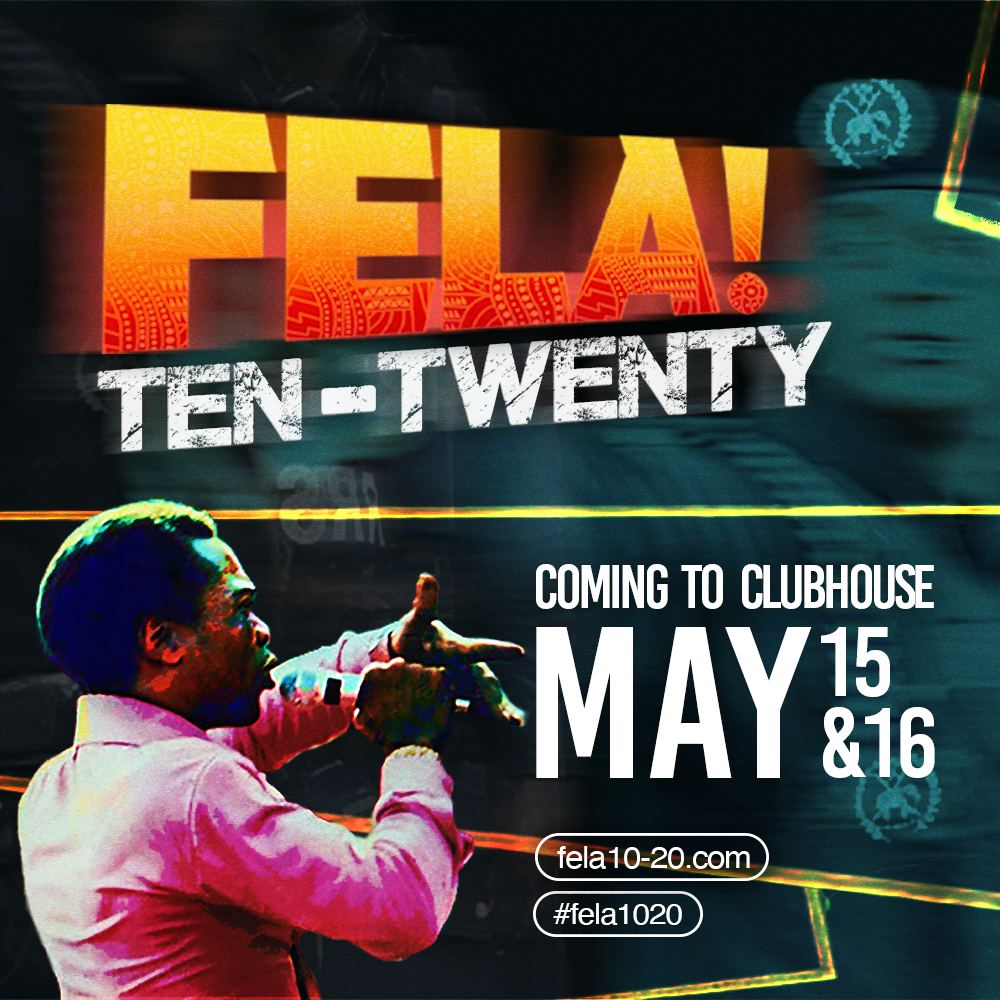 NEW YORK - OhioPen -- Stephen Hendel, the Original Lead Producer of the Broadway Show, FELA!, announced today that the audio adaptation of FELA!, written and directed by filmmaker Funa Maduka, will premiere on Clubhouse, the popular drop-in audio chat platform, on Saturday, May 15 and Sunday, May 16. Proceeds from the show will support GEANCO, whose David Oyelowo Leadership Scholarship provides full tuition, healthcare, and social and psychological support to young female survivors of terrorism and gender inequality.

Fela Ten Twenty, the title of the audio adaptation, will feature an exciting new interpretation of Bill T. Jones' and Jim Lewis' Original FELA! Script, framing the ongoing #EndSars movement in the context of Fela Kuti's legacy. Music for the production will be recorded in Lagos, Nigeria by The Cavemen, the band rekindling Nigerian highlife with their new album Roots.

"Fela's music, the foundation for Afrobeat, demanded global engagement with African political thought. In the aftermath of the October 2020 #EndSars protests against police brutality, his message still achingly resounds. This production is a love letter to those fighting for a better Nigeria," says Fela Ten Twenty writer, director and producer, Funa Maduka.

"Fela belongs to Nigeria, Africa and the world. It is a thrill to have the show reimagined by a team of young, creative Nigerians. I'm proud to support these artists who have come together to honor Fela Kuti's legacy with such immense commitment and dedication," says Stephen Hendel, whose hit Broadway show was nominated for 11 Tony Awards.

More on Ohio Pen
The production will feature a talented cast of actors from Nigeria, the UK and the US, including: Sir Marcell as Fela Kuti, Jumoké Fashola as Funmilayo Kuti, NC Grey as Najite- a Kalakuta Queen, Nneamaka Nwadei as Omolara- a Kalakuta Queen, Malikat Rufai as Sandra Izsadore, Uche Ogodi as J.K. Braimah, Comfort Dangana as DJ Switch, Adeola Adebari as Tunde, Muhammed Agboluaje as the Driver, LaToya Ransom as the Radio Journalist and Aliu Ajala as the Babalawo.

The production is produced by Stephen Hendel, Funa Maduka and Ọlabimpe Ọlaniyan, daughter of the late renowned Fela scholar, Tejumola Olaniyan. Kingsley Okorie and Benjamin James of The Cavemen are Music Directors; Marcellus Wesley is both Technical Director and Sound Designer; Ellen Marte is both VFX Director and Graphic Designer and Amanda Ezechi is Marketing Director.

The spark for this ambitious production came when a group of four friends, Eniola Mafe, Omolola Adele-Oso, Chinedu Enekwe and Audu Maikori, were inspired to host a table read of FELA! on Clubhouse to commemorate the tenth anniversary of the close of the show's Broadway run. They approached Maduka to direct, who pitched reimagining it, and the audio play adaptation was born.

More on Ohio Pen
OkayAfrica, the digital media platform dedicated to African culture, music, and politics, is the Official Media Sponsor of Fela Ten Twenty. The site has become a popular destination for Africans on the continent and in the diaspora.

More information can be found at the Fela Ten Twenty site here. Follow the show on Clubhouse here.

About THE CAVEMEN
The Cavemen is a Lagos based 'Afrocentric influenced' band led by Kingsley Okorie and his brother Benjamin James. The band has developed a genre called Highlife Fusion - combining elements of highlife, afrobeat, jazz and soul music.