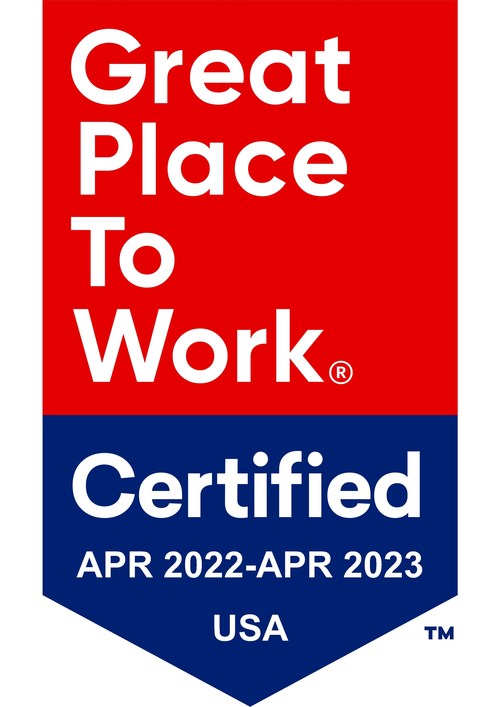 COLUMBUS, Ohio, June 9, 2022 /PRNewswire/ -- White Castle, America's first fast-food hamburger chain and popular retail CPG brand, is proud to share that it has once again earned the Great Place to Work® Certification™. It's the second consecutive year that White Castle has been included among this elite group of employers.

The 101-year-old, family-owned business has long been recognized as a leader in the food industry with incredible team member loyalty and engagement scores. More than 1 in 4 of the company's 10,000 team members have worked at White Castle for 10 years or more. And nearly all 450 of White Castle's regional directors, district supervisors, general managers, and operations leadership team members started their careers behind the counter at White Castle.

"Our team member loyalty is distinctive, and their engagement sets the standard in our industry," said John Kelly, chief people officer and fourth-generation family member. "We have the best team in the business, hands down!"

The prestigious Great Place to Work® designation is based entirely on what current team members say about their experience working at White Castle. This year, 80% of White Castle's nearly 10,000 employees said the company is a great place to work. That's 57 percentage points higher than the average for U.S.-based companies.

The certification news came just ahead of a cherished day on the White Castle calendar — "Elaine Miseta Day" — celebrated each year on June 8. Named for the administrative assistant who worked 67 years at White Castle for the company's first three presidents, the day is an annual opportunity to acknowledge the service of all of its team members, past and present. This celebration in 2022 marks the 80th anniversary of Elaine's first day on the job.

More on Ohio Pen
In September, White Castle will induct a special group of 42 team members to the 25-Year Club. In 1946, the company's founder Billy Ingram became the first team member to reach 25 years of service. Since then, many have followed in his footsteps. This year's inductees will bring the total 25-Year Club members to 2,205.

"Whether you are with us for two years or 20, we celebrate the great contributions of all our team members," added John Kelly. "The memorable moments they create for our customers truly can last a lifetime!"

Great Place to Work® is the global authority on workplace culture. Since 1992, they have surveyed more than 100 million employees worldwide and used those deep insights to define what makes a great workplace: trust. Their employee survey platform empowers leaders with the feedback, real-time reporting and insights they

need to make data-driven people decisions. Everything they do is driven by the mission to build a better world by helping every organization become a great place to work For All™.

White Castle, America's first fast-food hamburger chain, has been making hot and tasty Sliders as a family-owned business for 101 years. Based in Columbus, Ohio, White Castle started serving The Original Slider® in 1921. Today, White Castle owns and operates more than 350 restaurants dedicated to satisfying customers' cravings morning, noon and night. Through its retail division, which launched in 1987, White Castle also offers its famous fare in freezer aisles of grocery, convenience and club stores nationwide. The Original Slider, named in 2014 as Time magazine's "Most Influential Burger of All Time," is served alongside a menu of creatively crafted Sliders and other mouthwatering food options, including White Castle's Impossible™ Slider, named by Thrillist in 2019 as the "Best Plant-Based Fast-Food Burger." White Castle's commitment to maintaining the highest quality products extends to the company owning and operating its own meat processing plants, bakeries and frozen-food processing plants. In 2021, 100 years after the first Slider was sold, Fast Company named the fast-food pioneer one of the "10 Most Innovative Dining Companies." White Castle is known for the legendary loyalty of its team members, more than 1 in 4 of whom have worked for White Castle for at least 10 years, and also for its faithful fans ("Cravers"), many of whom compete each year for entry into the Cravers Hall of Fame. The official White Castle app, available at iTunes App Store or Google Play, makes it easy for Cravers to access sweet deals and place pickup orders at any time. They can also have their orders delivered using one of White Castle's delivery partners. For more information on White Castle, visit whitecastle.com.